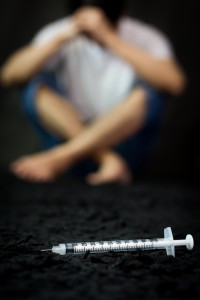 Heroin is an illegal, highly addictive drug processed from morphine, a naturally occurring substance extracted from the seed pod of certain varieties of the opium poppy plant. It is known to create an intense sense of euphoria and well-being.

It is typically sold as a white or brownish powder that is “cut” with sugars, starch, powdered milk, or quinine. Highly pure heroin can be snorted or smoked, and may be appealing to new users because it eliminates the stigma associated with injection drug use. “Black tar” heroin is sticky like tar or hard like coal, and dissolved, diluted, and injected into veins, muscles, or under the skin.

Usually referred to as a “rush,” an intensely pleasurable feeling washes over the user seconds after injection, and usually only lasts for several minutes. Following the rush, the user will feel extremely tranquil and happy, feeling no emotional or physical pain. This part can last up to several hours. Other short term effects of heroin use include dry mouth, nausea, severe itching, and vomiting.

The main psychoactive ingredient in heroin is diacetylmorphine, and the other two are morphine and acetic anhydride. Heroin triggers extreme sedation and euphoria when used because it interacts with neurotransmitters in the central nervous system. It acts as a depressant since the brain contains many opiate receptors. Heroin and morphine are both chemically similar to endorphins—which act as the body’s natural painkillers—because they bind to opiate receptors in certain spots of the brain that are related to emotion, movement, and pain. The brain converts heroin into morphine using enzymes, which then binds to opiate receptors, leading to nervous system depression and pain relief. Heroin can also have negative effects, by lowering mental functioning and slowing breathing sometimes to the point of respiratory failure.

Heroin is the most addictive drug in the world. People can become addicted to heroin very easily, simply because tolerance develops quickly. When users become tolerant to heroin, they’ll need more and more of the drug to feel the euphoric effects, the more they use. There are some major risks associated with heroin use, including:

Dealing with heroin addiction is difficult. LEAD has a staff of recovery experts who are available to answer any questions. Call today at 800-380-0012.