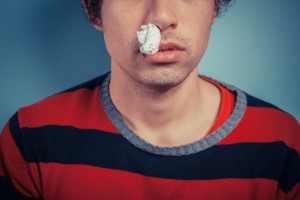 Maybe you have noticed something unusual in your son’s behavior or you have found unusual items in his room or among his possessions. Your observations have led you to  become concerned that he is using cocaine, but when you confront him directly he denies any and all drug use. Your parental instincts tell you that you should still be concerned not withstanding his denials. Cocaine use among teenagers is increasing due to the increasing availability of powder and other forms of cocaine at all levels of society. To answer your concerns, you can look for signs of cocaine use across three broad areas: your son’s physical bearing, his behavior, and his possessions.

Your son’s physical bearing might provide the most apparent signs of his cocaine use. If his pupils are unusually dilated or he frequently exhibits signs of nasal distress, your suspicions may well be justified. Nasal distress includes a constantly runny nose, nosebleeds, and an inability to smell or acknowledge strong odors. Cocaine is a powerful stimulant that will increase his heart rate. You might not be able to take your son’s pulse, but you can try to see if his respiration rate is increased, as that rate typically coincides with a rapid pulse. If your son is smoking crack cocaine, he might have burns on his fingers and around his mouth from the shorter and hotter pipes that are used to vaporize crack. Although less likely, he may be injecting liquefied cocaine, in which case he will have needle marks on his arms.

It may be difficult for you to distinguish common teenage rebellion from behavioral changes that are markers for cocaine use. Cocaine users often speak rapidly and jump from topic to topic. The stimulating effect of cocaine might drive your son to accept unusual risks. He may frequently excuse himself from your company to hole up in his room or a bathroom, and he may avoid regular chores and responsibilities around your house when he does this. Try to determine if his mood has changed radically after he returns to your company. Cocaine will temporarily increase his sociability and make him more talkative. All teenagers are prone to mood swings, but cocaine use will make those mood swings more extreme and noticeable. Lastly, his cocaine use might suddenly make him more withdrawn, and lead him to cutting off social ties with friends.

You might find cocaine use paraphernalia in his room and among his possessions, such as straws or empty pen tubes. Teenagers commonly argue that they are just holding these things for a friend. Trust your instincts if you hear this story from your son. Look for other signs of cocaine use, such as powder residue, metal pipes, and intravenous injection implements. Cocaine use can be expensive. Take note of any missing money or jewelry from your house.

Your son can become addicted to cocaine, particularly if he is using crack cocaine, in a very short time. That addiction will consume his life and if he is under the age of 20, his brain may not have developed to a point that allows him to recognize that he has a serious problem. Moreover, his continued use of cocaine at a young age will pose a risk of long-term brain damage. Your job as a parent, uncomfortable though it may be, is to monitor your son’s actions and to get help for him before his problem becomes unmanageable.
The staff and counselors at the Lead Recovery Center can provide further information on what you should look for if you suspect that your son is using cocaine. Please call us at 1-800-380-0012 for a confidential consultation and for assistance on how we can help you to intervene in your son’s problem and to convince him to kick his cocaine use.