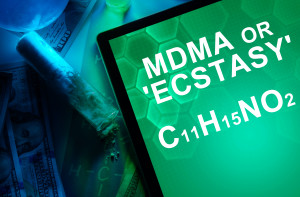 MDMA, also known as ecstasy, has many myths surrounding it. Although there are aspects of truth in these mountains of fiction, it is important to fully understand exactly what ecstasy is and what it can do. Ecstasy is a psychoactive drug that causes feelings of euphoria, warmth, and love towards others, in addition to warping time and depth perception. Ecstasy is a dangerous drug, and addiction is not an easy task, although it is manageable.

Some people believe that the color or appearance of the pill decides how much of the drug is in it. This assumption is false. Research has shown that the consistency, color, and appearance have no clear association with any dosage. In fact, the physical features of the pill are quite random.

A common myth is that ecstasy will burn holes through your brain. On principle, this is improbable and absolutely not true. Ecstasy does lower the levels of neurotransmitters that regulate your emotions and sleep. The drug also causes degeneration of the neurons that contain dopamine, which sometimes results in Parkinson’s disease. Although ecstasy does not burn holes in your brain, it is very dangerous and can cause serious medical diseases.

Ecstasy does not contain heroin contrary to some people’s beliefs. There have been rare cases of heroin in ecstasy, but the majority of pills do not contain the drug. A probable cause for the creation of this myth is the fact that Speed and Ketamine have been found in ecstasy, causing the groggy, distorting effects that are similar to heroin.

Perhaps the biggest or, at least, most disconcerting belief is that addiction is a moral failing. Addiction is a disease, and those addicted did not choose to become dependent on the drug. No willpower or moral standing can control whether or not you become addicted. Addiction is a chemical alteration of the mind, and needs to be treated as such. The disease of addiction takes over the rational thoughts, replacing them with obsession for the drug. Addiction is not a moral failing, and the sooner people realize that those with addiction need help and support, the better off society will be.

Another myth is that rehabilitation lasts for a few weeks before you are done and can move on. In actuality, rehab creates a plan and layout for your future life. They help you create ways to prevent relapse and become a functioning part of society that can thrive in their new environment. Addiction is an on-going struggle, not something that is easily remedied and forgotten. However, this battle can be won.

The last misconception is that drug treatment centers do not work. In many cases, the opposite is true. Studies show that centers reduces substance use by anywhere from 40-60% and can greatly improve the chances for remaining clean. They can greatly impact the future of patients by teaching new habits and lifestyles, and counseling patients on healthy mindsets.

Ecstasy addiction is not something to be taken lightly, and getting the help you need is important. Lead Treatment Center can guide you on the path to recovery and healing. Call (800) 380-0012 for more information.