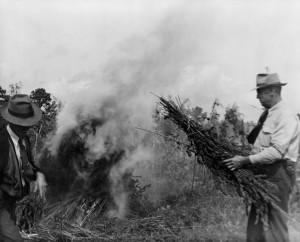 Marijuana has been used for almost five thousand years. Early Chinese medical texts include records of marijuana’s psychoactive and medicinal properties. Trade and cultural cross-breeding took marijuana from China and into North Africa and Europe, where it continued to have medicinal and occasional recreational uses. Spanish settlers brought marijuana to the North American continent in the mid-1500’s and marijuana quickly became an important cash crop for the American colonies in the early 1600’s. Hemp fibers from marijuana plants were used in a variety of commercial and personal fashion products before cotton supplanted hemp as the fabric of choice.

Marijuana’s medicinal properties were acknowledged in the United States Pharmacopeia between 1850 and 1942, during which time marijuana was routinely prescribed as a remedy for labor pains, nausea and rheumatism. Recreational use of marijuana also increased in the United States during this time. A prohibition-like campaign in the U.S. during the 1930’s and 1940’s stigmatized marijuana as an addictive drug that was a gateway to other dangerous drugs. Marijuana became a popular intoxicant among counterculture icons in the 1950’s and 1960’s, leading to its classification as a Schedule 1 drug in the United States under the Controlled Substances Act of 1970. That classification meant that, at least according to United States law, marijuana had no medicinal use, but it did have the highest abuse potential.

Marijuana uses and general public attitudes toward marijuana have changed throughout this long history. More significantly, concentrations and strengths of marijuana have also changed as both professional and amateur botanists have bred more potent strains of marijuana and chemists have isolated the psychoactive cannabis compounds in marijuana plants. The marijuana that is currently available from street dealers is at least two to three times more potent than marijuana strains that were available in the 1960’s and 1970’s. New forms of marijuana, including a wax form that is vaporized and inhaled in a process known as “dabbing”, are increasingly available. These stronger and more potent marijuana strains and ingestion methods are increasing risks and danger levels for recreational marijuana users. The science and research on whether marijuana is addictive or dangerous remains in a state of flux, but there is little doubt as to the increased dangers of higher potency marijuana. Recreational marijuana users who are not aware of these higher potencies can find themselves impaired for longer periods of time with greater psychoactive effects. Attempts to manufacture marijuana waxes and other concentrated forms of marijuana have led to fires and explosions in amateur processing labs.

The dangers of marijuana use are still being debated, but there is no debate over that fact that when you use marijuana recreationally, you are creating a state of intoxication that impairs your logic and coordination for a period of time. If you find that you are losing control over your use of marijuana, please contact the staff and counselors at the Lead Recovery Center at 1-800-380-0012 for assistance and answers to any questions you might have about your marijuana use or the history of marijuana in general.