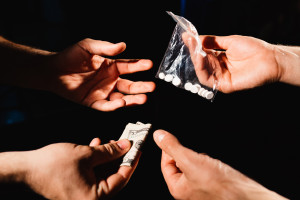 OxyContin is an opioid pain medication, or narcotic, which is used to treat moderate to severe pain. It is meant to be used as an around-the-clock treatment of pain rather than on an as-needed basis. When used properly, the medication can relieve pain for up to 12 hours, but when used in excess it can cause problems.

Because OxyContin is an agonist opioid, it is one of the most effective pain relievers available. The more one takes, the better one feels—which is excellent when it’s truly used to relieve pain. However, when one doesn’t use it carefully, it can become dangerously addictive. Some people use OxyContin by way of chewing, injecting, or snorting in order to avoid the controlled-release mechanism. This provides the user with a more immediate, intense high. As OxyContin use increases, the user may develop a tolerance to its effects and will need a higher dose to obtain that same high, which can lead to addiction.

When using the medication in a way not recommended, the risk of experiencing negative side effects increases. Side effects of abusing OxyContin can include:

In addition to these physical effects, OxyContin abuse can also negatively affect users financially and socially, as well as in their professional and personal lives. Many people end up having a hard time dealing with everyday responsibilities when they begin abusing OxyContin. Some people try hard to hide their use of the medication, but they will probably exhibit some clear signs of abuse. If any of the following occur, there could be a problem:

There’s been a lot of talk about OxyContin in the media in the past several years because of its growing amount of abuse. On top of taking it not as directed, many people will mix the medication with other substances. Common substances to mix with include alcohol, cocaine, or heroin. These all could heighten the intensity of an OxyContin high, and also increase the chances of negative side effects.
Dealing with addiction is difficult. LEAD has a staff of recovery experts who are available as a support system to answer any questions. Call today at 800-380-0012.