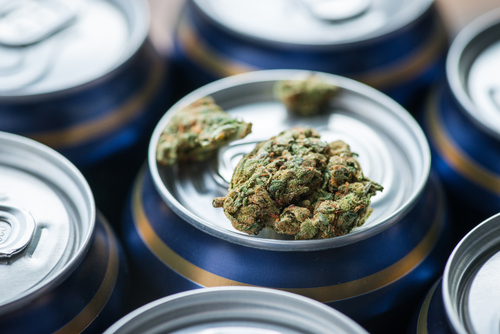 While it may be tempting to drink and smoke marijuana at the same time, using more than one drug simultaneously may lead to unwanted results. The risk factors multiply for complications when mixing two different drugs with varying side effects. Learn what to expect when mixing marijuana with alcohol.

The Cannabis sativa plant is where marijuana originates from which impacts the brain’s thinking, pleasure, memory, concentration, sensory and time perception centers. Alcohol, on the other hand, is considered to be a drug and many people like to experiment with drinking and smoking marijuana. Using both at the same time is considered polydrug use. Mixing the two could produce, at worst, lethal consequences.

Alcohol and marijuana enter the body through different paths and may act differently. Feeling numb, dizzy and losing track of time are some of the symptoms. When combined, accidents, irrational thinking and impaired judgment may result in some problems not to mention the major impact on the central nervous system. Some other symptoms include:

Alcohol enhances marijuana due to its sedative qualities. Acting as a depressant, it is rapidly absorbed by the gastrointestinal tracts and enters the bloodstream. Alcohol in the bloodstream makes blood vessels absorb the THC found in marijuana. Marijuana enhances alcohol as it is administered orally by eating or smoking. The individual effects vary but marijuana does not impact alcohol absorption into the body yet alcohol supports marijuana’s effects.

The risk of overdose increases when combining two drugs together. The biggest issue is generally dosages as both are easy to access and mixing a combination of too much of one, the other or both drugs together can be deadly. Driving under the influence of one or both is extremely dangerous and the burden is very high when it comes to involving other people’s lives. People who use medicinal marijuana may wait several hours prior to drinking or driving to ensure safety of themselves or others. Learning to mitigate the consequences of actions will be the best way to avoid risk of overdosing due to mixing alcohol and marijuana together.

Lead Recovery Center is a place of hope and restoration for young adults with addiction. Call us if you are ready to quit using drugs or alcohol and want to seek help at (800) 380-0012. We’re ready to help.