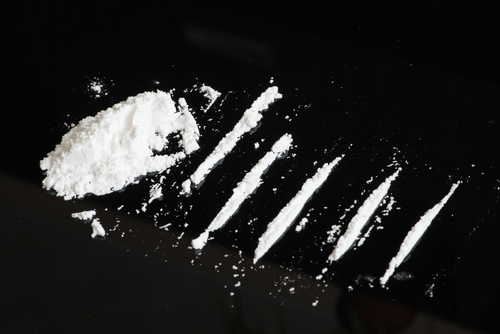 Cocaine is an extremely addictive stimulant drug which can have potentially deadly consequences when abused. Cocaine comes in several different forms and it can be snorted, injected, or smoked. The drug causes euphoria, high energy, and talkativeness, but a cocaine overdose also raises the heart rate and blood pressure to dangerous levels.

Cocaine stimulates the nervous system by increasing levels of dopamine, a neurotransmitter that influences levels of pleasure. Using cocaine causes the brain to flood the body with excessive dopamine, causing an intense feeling of happiness and energy. Unfortunately, repeated use of cocaine damages the reward pathway in the brain, therefore leading to addiction. Individuals who abuse cocaine can also develop extreme paranoia or feelings of depression.

Cocaine also constricts blood vessels, causing high blood pressure and heart rates, by triggering the release of norepinephrine, which is an adrenaline-like hormone. In addition to regulating pleasure, dopamine also controls body temperature, so cocaine users risk possibly lethal overheating. Since it diminishes the appetite, individuals who use cocaine regularly can suffer from malnourishment.

A cocaine overdose can result regardless of how the drug is administered.  However, the risk of an overdose and its chances of being fatal increase when cocaine is injected.  Smoking followed by intranasal use of cocaine appears to be the next riskiest ways of administration that increase the chance of an overdose and fatality. The risk of cocaine overdose also increases when other drugs are being used simultaneously with cocaine.

All of the various effects of cocaine can lead to ultimately deadly events during a cocaine overdose. Cocaine can be fatal in many ways. One of the most serious risks of using cocaine is the possibility of having a heart attack or stroke. Just using cocaine once makes an individual 24 times more likely to suffer a heart attack.

Using cocaine constricts the coronary arteries, which means that the heart has to work extra hard to pump oxygen and blood. If blood flow to the heart is completely blocked during a cocaine overdose, that will lead to a heart attack. If blood vessels in the brain are ruptured or otherwise affected, individuals can also have seizures or even strokes.

As the body deals with all of the negative consequences of a cocaine overdose, the individual may began to choke or vomit. If airways become blocked, an overdosing user may die from suffocation.

A cocaine overdose can be the wake-up call needed by an addicted individual to finally get help, but it’s even better to seek treatment before suffering an overdose that can permanently damage the body. Learn how you can quit using cocaine for good.

Addiction can cause health problems and personal problems, no matter the source. Lead Recovery Center seeks to help clients gain their lives back and learn to live autonomously without relying on external substances. For information on our transitional treatment programs, call us today at 1-800-380-0012.