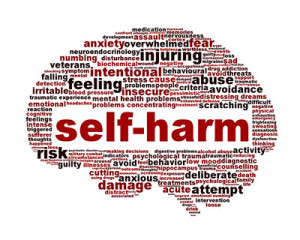 Self-harming behavior includes a wide range of activities (some of which are not considered by many people to be self-harm and are marginally acceptable in society). Examples include but are not limited to:

Why do people self-harm?

Self-harming behavior is very complex and involves a number of components that vary from person to person. In general, self-harming appears to be a coping mechanism. Self-harmers know that what they are doing is not acceptable and they are very good at hiding the behavior and wounds. Most self-harmers do not wish attention. But for some, such as those with mental retardation, self-harm is used an attention-seeking or manipulative behavior. All of the following components which underlie self-harming do not necessary apply to every self-harmer:

Treatment and Prognosis for Self-Harming

Treatment for self-harming behavior is a long-term process. Success has been found in self-harmers who desire to end the self-harming, are highly motivated and are persistent with the necessary treatments.