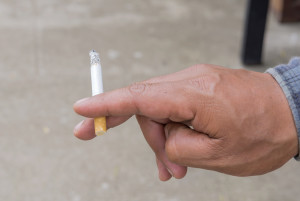 We certainly know that nicotine is addictive, but just how addictive is it? We’ll explore that, as well as take a look into how it affects the body and how to control an addiction to it.

Tobacco use is the leading preventable cause of disease, disability, and death in the United States. According to the CDC, cigarette smoking results in about 1 in every 5 U.S. deaths. In fact, nicotine dependence is the most common form of chemical dependence in America. Tobacco companies are completely aware of nicotine’s addictive nature, and they capitalize on it.

A naturally occurring chemical, nicotine is a toxic, colorless or yellowish oily liquid that is the chief active constituent of tobacco. It acts as a stimulant in small doses, but in larger amounts blocks the action of autonomic nerve and skeletal muscle cells. Nicotine is also used in insecticides.

When chewed, smoked, or snuffed, the nicotine in tobacco is absorbed into the body. It can enter through various mucous membranes in the nose, skin, mouth, and lungs, and then circulates through the brain. Nicotine increases levels of dopamine in the brain, which is a similar reaction to other strong drugs including cocaine and heroin. It also has an effect on the heart, by increasing blood pressure and heart rate, and controls nerves responsible for regulating breathing patterns.

Many people who pick up smoking don’t think they’ll get addicted, but it’s not up to them. Nicotine is just as addictive as alcohol, cocaine, or heroin. It occurs over time, and for many people it’s because of long term brain changes resulting from continued nicotine exposure. In order to determine whether one has a nicotine addiction, the following two symptoms must be present:

Some people are able to overcome nicotine addiction completely on their own, using strength and willpower. Others may need a boost of help from medications to either replace nicotine and/or ease the withdrawal symptoms. Psychological treatment is another option for quitting as well.
Dealing with a nicotine addiction can be frustrating, so don’t hesitate to ask for help. LEAD Recovery’s staff of experts are available to answer any questions, so call today at 800-380-0012.