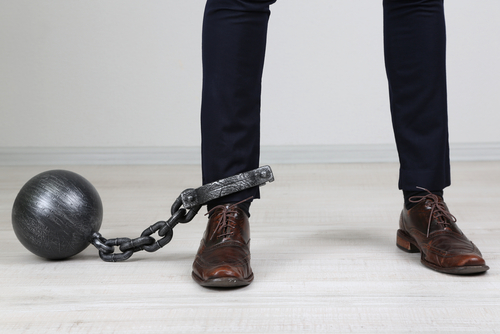 There is little denying the heavy weight of depression. Whether you have lived with the mental illness personally or been in a relationship with someone who is struggling with depression, the worldwide facts about depression bear its burden. For example, the World Health Organization cites that over 350 million people live with depression globally. In America, 6.7 percent of adults experienced a major depressive episode within the last year, as of 2015. Depression is everywhere. Similarly, that is the experience of living with depression. Depression is more than just some moodiness, sadness, or fatigue. Depression seeps its way into almost every area of life, changing the way people feel, function, and relate to the world.

At times, depression can feel like an unnecessary ball and chain we have to drag around with us everywhere we go. The pervasive hopelessness, heightened sensitivity, and erratic emotions are unending. However, Paul Andrews, an evolutionary psychologist from Canada, believes that depression is not without a purpose. He hypothesizes that depression might serve a very specific and helpful purpose. Featured in Nautilus, Andrews proposed his perspective on depression which is “…that depression may be ‘an adaptation for analyzing complex problems,’” according to New York Magazine. In discussing the Nautilus feature, the article explains that when someone with depression goes inward, hunting for the source of their depression, they actually display evolutionary skill building to solve problems. Depression, in the way that it essentially removes someone from being in present in life, might act somewhat like a parallel universe where someone has the ability to dive deep within themselves, time travel, and discover the trigger of the depression. More than taking a quest for answers, depression can create understanding. The depth of emotion and broad spectrum of symptoms is a like a labyrinth full of doors leading to various parts of the mind. Ruminating is often thought to be a problematic practice. Andrews’ theory positions rumination as a helpful tool for gaining emotional intelligence.

Currently, Andrews’ theory is nothing more than a hypothesis. Still, the perspective he presents is worth contemplation, if not rumination of its own.

LEAD Recovery Center knows that depression has to be worked with, not against. Our dual diagnosis extended care treatment programs are designed to create healing and transformation for clients struggling with depression in addition to other co-occurring issues. For more information on our treatment programs for men and women, call 800-380-0012.