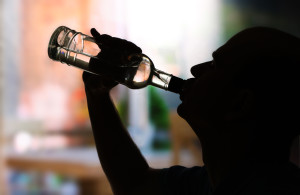 In very advanced cases, an alcoholic can experience delerium tremens (“DT’s), which in most instances requires medical intervention to prevent long-term harm or injury to a recovering alcoholic. Symptoms of DT’s include seizures, confusion, hallucinations (recovering alcoholics have often reported seeing and feeling insects on their skin), and elevated blood pressure, body temperature, and heart rates. DT’s are more common in alcoholics who have been drinking for a long period of years. The onset of DT’s can occur any time within the first seventy-two hours after a long-term alcoholic has had his last drink, and can affect the alcoholic for up to ten days after that.

Individuals who are experiencing alcoholism withdrawal symptoms should seek immediate medical treatment to prevent permanent organ damage and other injuries that might occur as a result of seizures or hallucinations. Treating physicians will typically monitor alcoholics who are going through withdrawal to keep them properly-hydrated and to reduce fevers and nausea symptoms. They might prescribe sedatives or tranquilizers to ease the worst withdrawal symptoms. The initial withdrawal symptoms are only the beginning of an alcoholic’s rehab and recovery. Many alcoholics will not achieve anything close to real sobriety for months or years after they go through withdrawal.

Alcoholism is a chronic disease. An alcoholic’s brain and body react differently to alcohol than the brains and bodies of individuals who are not addicted to alcohol. Alcoholics do not consume alcohol for relaxation or any other pleasurable sensations that might be associated with casual drinking. Instead, an alcoholic consumes alcohol because his brain and body crave it as part of their regular functioning. An alcoholic’s withdrawal symptoms are a manifestation of his brain’s and body’s fighting to drive the alcoholic back into his drinking habit.

Withdrawal symptoms from alcoholism can range from mild, to severe, to life-threatening. Before alcoholism was treated as a disease, people would joke that alcoholics routinely saw pink elephants or other unusual apparitions while going through withdrawal. We now understand that those hallucinations are an extreme and very real symptom of a potentially fatal disease. Alcoholism withdrawal can be harmful and fatal if not addressed properly.     If you have experienced withdrawal symptoms when you have stopped drinking and have resumed your drinking to alleviate those symptoms, please contact the staff and counselors at the Lead Recovery Center at 1-800-380-0012 for assistance and alternatives to suffering from or experiencing those symptoms.